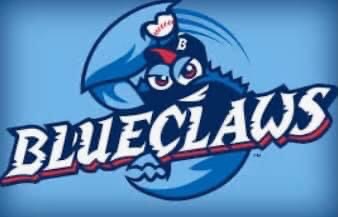 Continuing with a historical review of the Phillies Minor League teams. Today I look at the Phillies history at the “A” level affiliation with a primary focus on the present club - the Lakewood Blue Claws and the South Atlantic League.

As previously noted in 1963 minor league classifications were adjusted to create the outline of the present structure with AAA, AA and A levels being the framework. In 1966 a further distinction was made to separate “Short Season” leagues from A. Another refinement took place in 1990 when the Advanced A classification was added - the California League, Florida State League and Carolina League were moved to the Advanced A distinction.

Today the South Atlantic League (SAL ) and the Midwest League are the only two full season leagues classified as A level, sometimes referred to as “Low A”. The current SAL evolved from the Western Carolinas League having been renamed in 1980 ... it’s known also as the Sally League.

It was restarted once more as a class B league from 1936 to 1942 but shut down during WWII and returned in 1946 as a class A league. It was promoted to the AA level in 1963 ... one year later the name was changed to the Southern League. The South Atlantic League name went unused for 16 years, but in 1980 the name was brought back when the Western Carolinas league changed it’s identification.

Phillies A level clubs in other leagues ( not including Florida State League which I’ll write about separately ) :

Prior to the 1963 re design the Phillies had multiple “A level” teams ... the initial club was the Hazelton Mountaineers operating out of Hazelton, PA from 1934 to 1936 in the New York Penn League. The Utica Braves/Blue Sox ( Utica, NY ) was the A level affiliate from 1943 to 1950 in the Eastern League. The Schenectady Blue Jays ( Schenectady, NY ) became the primary A level team from 1951 to 1957 also playing in the Eastern League. There were one year affiliations with A level franchises in Tri City, Spokane and Salem from 1952 to 1954 as well.

The Williamsport Grays ( Williamsport, PA ) took over as the primary Phillies A level team from 1958 to 1962 in the Eastern League.

In 1963 the Spartanburg Phillies ( Spartanburg, SC ) were born as an A level member of the Western Carolinas League, then switching to the South Atlantic League concurrent with the 1980 name change. The Spartanburg franchise also changed it’s name to the Traders for the 1980 season, the Spinners in ‘83 and the Suns in 1984 before reverting back to the Phillies name in 1986.

In 1995 Spartanburg’s team moved to Kannapolis, NC and became the Piedmont Phillies ... later named Boll Weevils and served as the affiliate in the South Atlantic League from 1995 to 2000.

In 2001 the Lakewood Blue Claws franchise was born, it’s been the Phillies SAL A level affiliate ever since.

I’ll detail the Phillies Carolina League teams and the Spartanburg/Piedmont franchise history of players and managers in a separate posting ... today’s player/manager focus is on the Lakewood franchise.

Players who made it the the Major Leagues :

The ‘2018 club went 87-51 and were finalists for the league title succumbing to the Lexington Legends in the championship series ... Spencer Howard tossed a no hitter in the playoff series against the Kannapolis Intimidators.